The summary of their letter says “As signalled in our pre-application advice, we object to the granting of planning permission. The Royal Military Canal is a scheduled monument and its conservation warrants great weight in any planning decision. It is also part of a related group of heritage assets the significance of which would be diminished if the proposed development were to go ahead. We believe that this proposal would cause serious and unjustified harm to the significance of the RMC and its associated monuments, as a consequence of the proposed major change affecting the setting. We do not consider that the heritage benefits claimed in mitigation of this harm are sufficiently closely related to the proposed development for them to be legitimate part of a planning decision. In accordance with the Development Plan policies and the NPPF, we recommend refusal of permission on heritage grounds.”
Read the full letter here:
Historic England Objection Letter
Having read the additional documents put out to consultation in March 2018 they say that the information does not address their existing objection so it must stand.
additional – HE comment
And their response to the next batch of additional documents
HE 13.7.18
And their response to the consultation on the ES Addendum HE Letter 19.6.19
KCC Archaeology Dept Also Recommend Refusal of Planning Permission

The archaeology department of Kent County Council has submitted a comment to the planning application that says that the harm to the historic environment provides sufficiently strong grounds for the application to be refused.

They say that it is not enough  to consider the impact of the development on certain fixed views as the applicant has done. Instead the assets setting needs to be considered “in the round” looking at a range of views, environmental factors and mental links that are understood together.

They believe that the harm that the scheme would cause is higher than the applicant’s assessment of “limited to moderate harm.”

The say that the contribution the development would make to Shepway’s housing need is small.

And they conclude by pointing out the great weight that the NPPF places on the conservation of the Royal Military Canal as a designated asset of the highest significance.

You can read the full report here:

And their response to the addendum to the ES statement KCC Archaeology 10.6.19
Historic England@ Comments on PPLP submission draft Mar 2017
“In summary, in general terms while we accept that the draft local plan has the potential to
provide a good basis for the conservation and enjoyment of the historic environment and
heritage assets as required by the NPPF (para 126) and could provide a strategy for enhancing
the historic environment (para 157), this is seriously undermined by the lack of a sound
evidence base for the historic environment and, in particular, by the inclusion of policy UA18
that promotes development that is fundamentally harmful to a specific, nationally significant
and unique heritage asset. On this basis Historic England cannot support the Shepway Places
and Policies Submission draft Local Plan and believes it to be inconsistent with national
policy and to be unsound.”
You can read their full letter here: Historic England UA18 – Detailed response
Historic England’s Comments from the Local Plan Preferred Options Consultation November 2016

– Historic England is of the view that this site should not be allocated for significant new development in the draft local plan, and that it should remain as largely open green space as per the last Local Plan inquiry and the decision by the Inspector. This may allow for modest development envisaged in the last Local Plan site specific policy for this site.

We object to the inclusion of a site specific policy for Princes Parade allocating it for significant development when we are not agreed that in principle this is a sustainable location for major new buildings based on the likely effect of these on the Royal Military Canal designated heritage asset through its setting.

The draft policy appears to be coached in language that is a justification for a development proposal that Shepway DC has in preparation in its role as the landowner and site promoter. The local plan should objectively provide a framework and guidance about how a sustainable future for the Princes Parade site might be possible taking into account the advice of the NPPF. We have yet to see a detailed scheme proposal for the combination of a new leisure centre, a significant amount of new housing, public open space and other buildings, but based on our knowledge of the site we doubt that this can be achieved without harm to the designated heritage assets. The precise level of any harm will need to be assessed based on precisely what is proposed, but even if the harm is found to be less than substantial within the terms of the NPPF it cannot be assumed that public benefits will be capable of decisively outweighing any harm, as has been determined in recent case law.

NPPF at para 132 is clear that great weight should be given to the conservation of designated heritage assets, that the significance of these can be harmed through development within their settings, and that any harm to designated heritage assets requires clear and convincing justification. In applying this guidance to a policy for this site the justification for permitting harmful development would have to be established. This would include whether there are alternative solutions that might provide equivalent or similar levels of public benefit but without causing the harm to the heritage asset. As there is an extant permission including for a swimming pool at Nickells Quarry and consideration has been given to other potential sites, including the existing swimming pool site and Hythe Green, we must doubt that the necessity of harmful development at Princes Parade can be established. Issues arising from the timing of implementing any planning permission already granted are not a justification for harmful development in this instance.

The inclusion of an allocation of a significant amount of new housing at Princes Parade is a further concern for us. It would very likely increase the level of harm beyond that likely to arise from a leisure centre alone. If alternative less harmful locations for new housing exist in the district that allows the Council to meet its objectively assessed housing needs then Princes Parade need not be allocated for this purpose at this time. This may particularly be the case if additional capacity for new housing is identified elsewhere; in particular, the recently announced (11 November 2016) government supported proposal for a Garden Settlement at Otterpool Park may provide the scope for meeting (and even exceeding) that need.

We note the comments in the supporting text (para 5.171) about this being a “sustainable” location for this kind of development. Sustainable development is defined in the NPPF at para 7 in which it is noted that this has economic, social and environmental roles. The latter includes specific mention of protecting and enhancing the historic environment; the three dimensions of sustainable development are not mutually exclusive and they should be sought jointly and simultaneously. To fail to do so would misrepresent the purpose of the NPPF.

Under the core planning principles (NPPF 17) there are 12 key topics and one of these is to conserve heritage assets in a manner appropriate to their significance, so that they can be enjoyed for their contribution to the quality of life of this and future generations. In ouropinion sustainability goes beyond such factors as the location of the site close to transport links and existing housing, and for major development at Princes Parade to be shown to be  sustainable it must comply with the advice of the NPPF, and hence protect and enhance the designated heritage asset that forms a major feature of the site and its surroundings. We doubt that development on the scale now proposed can achieve this.

This must affect the weight that is given to avoiding harm and it is not a simple balancing exercise as there is the great weight that must be afforded to conservation of designated heritage assets under NPPF 132, and this shifts the balance towards protecting and enhancing the significances of the site. Heritage benefits such as improvements in the condition of the monument itself whilst welcome are unlikely to outweigh the harm, especially as there may be other ways to secure these without harmful development. Whilst accepting that the topography is changed from when the Royal Military Canal was built one’s  experience of the Canal would be fundamentally altered if approached and experienced with buildings, however well designed, replacing the current open space which is intrinsic to the setting of the monument.

Shepway had a meeting with English Heritage on 27th August 2014. In preparation for the meeting with EH, Shepway commissioned yet another consultant’s report – this time from chartered architects the Lee Evans Partnership

In a letter dated 5 August 2014, Lee Evans recommend that Shepway omit housing from the plans because they think it unlikely that the council would be able to prove the necessity for the proposed housing on the site given other potential housing sites in the area and given that previous Planning Inspectors have rejected housing on the site.

Lee Evans prepared a Heritage Impact Assessment for Shepway.  We submitted a Freedom of Information request so we could see this report. This request was initially denied by Shepway so we requested an Internal Review and eventually Shepway agreed to provide it. In this report Lee Evans repeat the recommendation to  delete the housing from the proposal and discuss the risk of significant damage to the Royal Military Canal (which is a Scheduled Ancient Monument.) Although this report was mentioned in the papers for the cabinet meeting on 22 July 2015 its conclusions weren’t quoted and nor was a copy of the report attached to the agenda.

Here is a letter and heritage assessment produced by Shepway’s former heritage consultants. They have now been replaced by Martin McKay.

These are the comments submitted by English heritage as part of the Local Plan consultation:

Here are some earlier comments from English Heritage dated 2 July 2014: 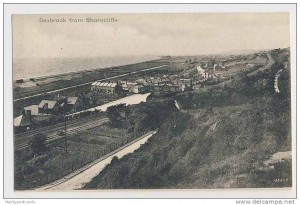