It is on record that historically japanese knotweed was present on Princes Parade.

A Shepway District Council official told the Folkestone & Hythe Express on  8 Feb 2017 that the japanese knotweed was “removed from the site more than 10 years ago”. However when evidence of this was requested via a Freedom of Information request, Shepway said they did not hold the information.

Questions about the knotweed were raised at cabinet on 7 February 2017.

At the meeting an officer admitted that japanese knotweed had been present on the site between 2002 and 2005 but had been subject to a programme of control. He claimed that more recent survey work did not find any knotweed on the site.

But in August 2017 a member of the public found a knotweed plant on Princes Parade.

In an email to a SPP member dated 25 August 2017 the chief executive said “With regards to the specifics of Japanese Knotweed – I can assure you that officers from the Council carry out regular checks on our land and undertake an eradication programme for invasive plants. The programme includes addressing any incidences of Japanese Knotweed, which is usually dealt with via stem injection.”

In 6 September 2017 edition of the Folkestone & Hythe Express the council admitted that a small amount of the plant had been identified adjacent to the development site. (Note not the proposed development site.) They also said that if any japanese knotweed was discovered on the site itself it would be treated and the site cleared before any houses were built.

In the same article they said “Princes Parade has been thoroughly walked by grounds maintenance officers and no other plants have been identified.”

The site was at the time heavily overgrown with nettles and brambles so we would be interested to know how the officers have managed to “thoroughly” walk the site. 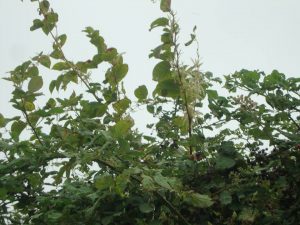