This article was originally published 21 April 2017. Rory Love is standing as Conservative candidate for  election again in 2021.

Below is a video of the cabinet meeting on 13 April 2016 referred to.

Rory Love is the Conservative candidate for the Hythe East, Sandgate and Cheriton division for the Kent County Council elections on May 4th. He is also a cabinet member on Shepway District Council. This is from the leaflet he has been distributing in the area. 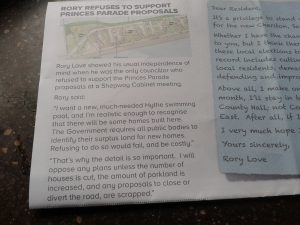 He claims that he refused to support the Princes Parade proposals at a Shepway Cabinet meeting. He is referring to the meeting on 7 February this year where he didn’t vote against the proposals – he just abstained. (Though to be fair he did speak against the diversion of the road). At all other cabinet meetings he has voted FOR the proposals to develop Princes Parade including at the meeting on 13 April 2016 when the number of new homes jumped from 36 to 150 with no real explanation. So why is he now saying that he opposes the plans unless the number of houses is cut? This just isn’t supported by his voting record. If you want proof of this you can view videos of the cabinet meetings and find links to the minutes of the meetings here: