Here is the text of the email we have sent to all councillors ahead of next week’s Overview & Scrutiny Committee and Cabinet meetings:

Exclusion of the Public

It is very disappointing and frustrating that the council is persisting with its intention to exclude the public from part of the Overview & Scrutiny Committee and Cabinet meetings next week despite the representations from our solicitor and others.

The law does allow councils to exclude the public from meetings (provided the correct notice is given) if they will be discussing information relating to the financial or business affairs of any particular person. That “person” could be the council itself.

However, there is one important exception to this: “ Information is not exempt information if it relates to proposed development for which the local planning authority may grant itself planning permission pursuant to regulation 3 of the Town and Country Planning General Regulations 1992”.

FHDC have not yet formally granted planning permission so this exception still applies to next week’s meetings.

Dr Priest is trying to claim that this exception only applies to the discussion of the planning application not the business case but there is nothing in the law that limits the exception in that way.

Whether or not to allow the public to remain in the meetings is a matter of law not a political decision. Our solicitor is of the view that to exclude the public from the meetings would be unlawful. Dr Priest has declined to show us the legal opinion that the council has obtained about this.

Dr Priest has stated “It is, of course, for the members of the Cabinet to decide whether or not to exclude the public from the meeting.  Objections to the exclusion will be placed before Councillors so they can take them into account.  The public interest will also be considered prior to any decision on whether or not to consider the matter in private.”

On behalf of the members of Save Princes Parade I would argue that it is very much in the public interest for the discussion of the Princes Parade Business Plan to be held in public in order to reassure local residents that the council would not be taking unnecessary financial risks should cabinet resolve to continue with the Princes Parade project. Therefore I would ask you not to vote to exclude the public from either of next week’s meetings.

Loss of Oversight of the Project

The recommendation in report C/18/69 is that cabinet authorise the Corporate Director – in consultation with the Leader of the Council and the Cabinet Member for Special Projects – to implement the steps necessary to deliver the Princes Parade project and also to dispose of the existing Hythe Swimming Pool site.

But by doing that, the other cabinet members and members of the Overview & Scrutiny Committee will lose oversight and control of the project and also have no say in the future of the existing pool site. This would also mean that there will be no possibility of public scrutiny of the progress of the project when surely the council should be aiming for as much transparency as possible.

Report C/18/69 makes clear in para 4.4 that the financial estimates remain indicative at this stage and in para 5.1 that the development of the project to date has been based on a number of assumptions. Para 5.1 also lists some significant risks associated with the project.

It is therefore far too early for cabinet to be ceding control of the project. After all it is the elected members of the council who will be held responsible by the public for any financial losses or environmental damage caused by the project not going to plan.

Report C/18/69 refers to the Arlingclose review and also a more detailed risk register and a recently updated options appraisal but none of the documents appear to have been provided in full to councillors.

Para 1.3 states that the Environment Agency has withdrawn its objection to the surface water being drained into the canal and claims that “these issues have been resolved”. However, as I pointed out in my email of 26 January, the Environment Agency refers to this option as being “just-about-viable” and says that discharge into the sea would be the overwhelmingly preferable option. They say that discharge into the canal (option B) should be an emergency fall back option only.

They go on to say “We would need quite a degree of liaison and persuasion from any prospective developer if this alternative option B is pursued.”

So it is not true that these issues have been resolved.

The EA also points out that option B would incur significant costs. Have these been taken into account?

Para 1.3 also states that the National Planning Casework Unit have been notified of the current position so that the Secretary of State can consider whether to call in the application. However in an email to us dated 6 February 2019 the planning officer says “Folkestone and Hythe District Council have not informed the National Planning Casework Unit that we are ready to issue the decision.”

Appendix 2  is a diagram showing the masterplan of the site. What it omits to show is that if option B is adopted to deal with the surface water then a considerable amount of the western open space will be taken up by a pond – as shown in this diagram from the latest Herrington’s report. 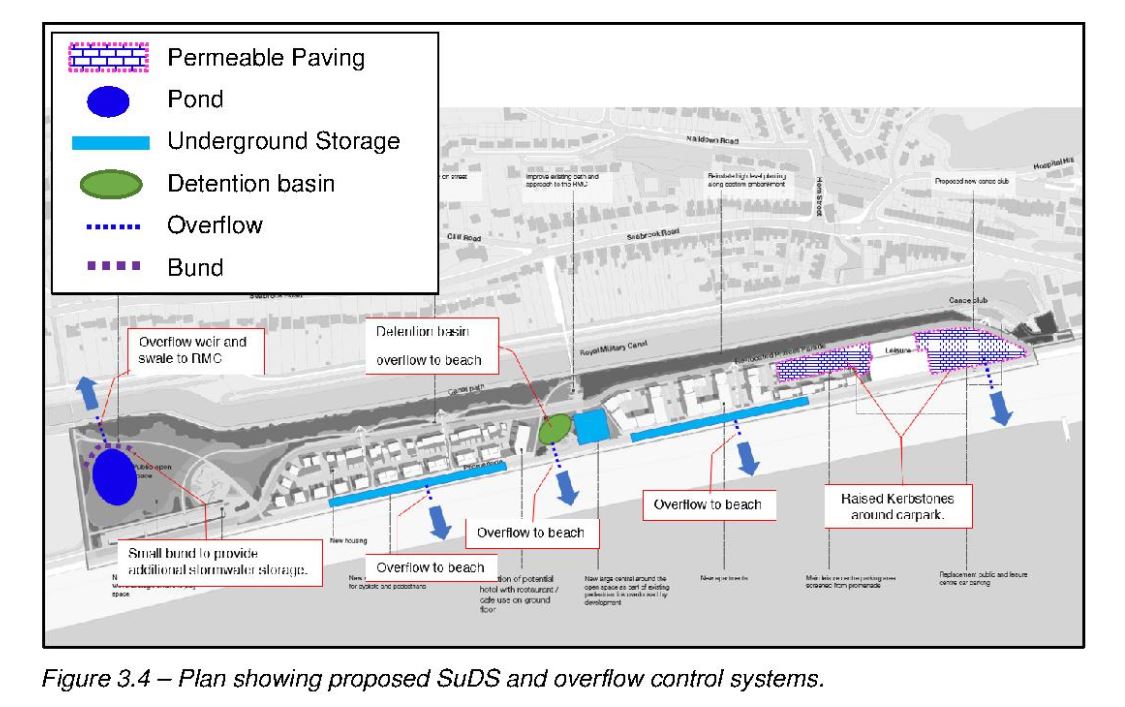 Para 2.4  gives the impression that the project will somehow cure the contamination.  It will not because the contaminants will remain in situ and will get disturbed by piling and excavations as the project progresses even after initial remediation.

Para 2.4 also says that if the Princes Parade project does not go ahead then the council will need to consider addressing the current levels of contamination. However, para 7.5.1 of this report

states “As the majority of the site is heavily vegetated potential exposure to underlying made ground is significantly reduced. Therefore the risk to the general public and current site users is considered to be low.”

In other words there would be no need to remediate the Princes Parade site if the development did not go ahead.

Para 2.25 Without the benefit of being able to see the Business Case for the leisure centre it is hard to be sure but it seems unlikely that there is an unmet latent demand for 2300 memberships. What catchment area does this cover?

We are also concerned that the reference to living wage incurring an additional average cost implies that the intention is to pay staff less than the living wage which would not be acceptable.

We have had sight of the slides presented to the Princes Parade Working Group in March 2018 which claim a very optimistic 351276 users per annum ie 960 per day. Is that realistic?

Para 2.7 – What are the status and conditions attached to the £1.978m grant.  Is it specifically for expenditure on Princes Parade?

Para 2.10 The failure to disclose to the public the Procurement & Programme Review is a major concern since this should cover the all-important matter of project management control of this complex project and where the day-to-day responsibilities will lie. It is very much in the public interest for the council to demonstrate that the project will be properly managed.

Para 3.2 is vague about how the disposal of the residential/commercial land will proceed. Given that the viability of the project is totally reliant on the proceeds of the land sales it would be reckless to commit to the leisure centre construction work in the absence of a binding contract to purchase the land  – and vice versa.

It talks about commencing the disposal of the existing Hythe Pool site (recommendation 4) once planning permission has been granted and at the same stage as the procurement of the core consultant team.

Does that mean the current pool site could be sold off before the new leisure centre is built i.e. no useable pool in Hythe for a year or two? Or longer if there are construction delays? Or a risk of no pool at all if building costs suddenly escalate substantially once they get started on the PP site?

I assume that Dr Priest’s response to our last email has been circulated to all councillors. The council is still missing the point that certain costs have been costs have been omitted because they have fallen into the gap between the B&M calculation and the Savill’s valuation.

Worryingly, in response to our point 6 about the inclusion of the Imperial Green off site affordable housing s106 monies as income of the scheme the council say “It should be remembered that the basis for this proposal is that it is an enabling scheme.” Does this mean that, despite all the promises that this project will provide affordable housing, it is unlikely to provide as much as it should?

Note that the B&M response to Dr Burrell’s critique states that the hotel and restaurant would be provided by a developer whereas according to para 4.2 of the officer’s report Arlingclose say the council will have to take that on.

The proposals for Princes Parade are extremely unpopular with local people and represent a huge risk to the council – financial, reputational and otherwise. The information provided to you is still at the indicative stage and based on a number of assumptions.

We would therefore urge you not to approve the business case and not to delegate the delivery of the project but instead to halt it. Failing that we would urge you to keep control of the project and to delay implementation of it until officers are in a position to offer you more certainty that it will not become a financial black hole.